I recently bought some Hiramasa Kingfish fillets, not really knowing what I was going to do with them, but having some vague idea of using up rocket, mint and green mango from the fridge.  When I searched for recipes most of them were for either cured or sashimi-style fish and the ones that were for seared or roasted fish were too heavy and stodgy.  I remembered a recipe I had come across by Martin Boetz from Longrain that was for seared Kingfish with watermelon and roast shallot dressing.  I had made this previously but found the dressing too fiddly and the Kingfish too cooked (I prefer mine barely cooked – just warmed).  So I decided to just wing it and see what would happen.   The result was better than I had hoped; in fact, it was delicious and I will definitely make it again.

Hiramasa Kingfish is a high-quality sashimi grade Yellowtail Kingfish, farmed under strict standards.  Hiramasa is the Japanese name for this fish –  it is highly regarded in Japan, where the fish is hand packed to avoid bruising.  Hiramasa Kingfish is the Australian name for this fish, and it is also a high quality sashimi grade fish. It has pale pink flesh with firm, large flakes and a sweet, rich flavor.  Hiramasa has a higher fat content, firmer texture and cleaner flavor than wild Yellowtail Kingfish (Amberjack).  Because of its firm fatty texture it is a perfect fish to use for sashimi and other raw fish dishes. More info: http://www.chefs-resources.com/seafood/finfish/hiramasa-kingfish/#ixzz4ZMrsUtau 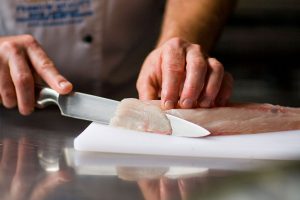 Kingfish with mint, basil and watermelon

Heat oil in a hot pan and sear fish on one side.  Remove from pan and rest.  The fish will probably come away from the skin.  Keep frying the skin until it is nice and crispy.  Remove and reserve for garnish.

Cut fish into slices.  Return pan to heat and deglaze with a splash of soy sauce and squeeze of lime juice.  Add sliced fish and turn to coat.  Remove from pan.

For dressing: mix all ingredients in a jar.

To serve:
Arrange mint leaves, basil, radish, onion, watermelon and green beans on plates.  Thinly slice the Kingfish then place on top of other ingredients.  Pour over dressing.  Scatter fried onion and shred or crumble the crispy fish skin over top.

Now I need to think of something else to do with my green mango, rocket and other bits and pieces.  It’s time for a fridge clean-out.

Apologies for lack of photo – I only realised how good the dish was towards the end – too late to take a photo. 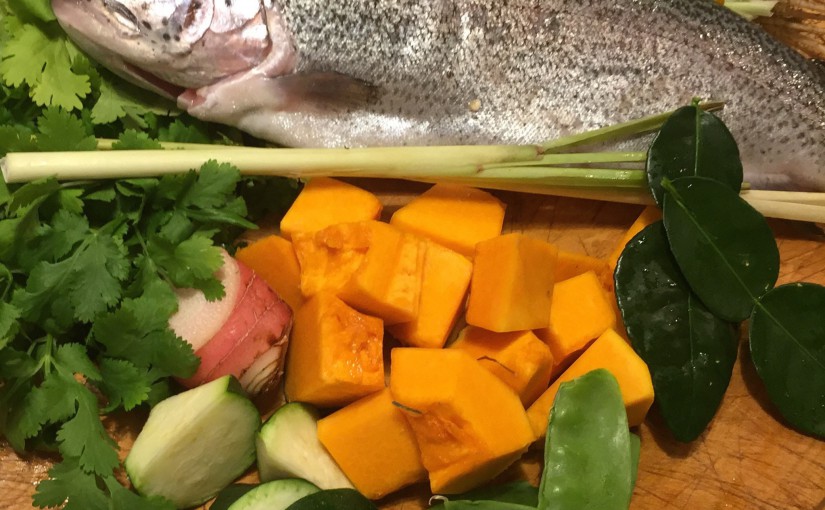 There was nothing very inspiring in the way of fish at the shops today and I didn’t feel like meat but there were some nice looking rainbow trout.  I’ve been cooking rainbow trout ever since the early ’80s.  A simple grilled rainbow trout – rubbed with salt, pepper, lemon juice and olive oil – accompanied with lemony potatoes and a simple green veg was a stand-by dish.  It was one that I could serve up to guests (though strangely I discovered that a lot of people were scared of whole fish with bones.  Actually a lot of people just didn’t eat fish!)  The potatoes were key:  cubed and cooked in a small amount of chicken stock which was then reduced with some butter and the addition of lemon juice and then fresh chopped dill, chives and parsley folded through and a final cracking of black pepper.  It still remains a dish I do on occasion.

I have a rather wonderful – and super easy – Thai recipe for rainbow trout with little Thai pea and apple eggplants.  Alas here in Noosa there are no such things.  And in that particular dish, you can’t just substitute ordinary eggplant or even the Japanese variety.  But I did think that a red-style curry with pumpkin would work well, perhaps with some zucchini and a handful of snow peas for colour and to accompany, a cucumber relish.  Quick and easy.

Making Thai-style curries is a process of just going with whatever’s in your fridge/pantry and letting your taste buds guide you.  So if you don’t have a particular ingredient, either skip or substitute.  For this curry I had on hand:

and that’s all that is needed for a basic curry paste.

To make the curry I brought some coconut cream to the boil and then added my curry paste (just blitz all the above ingredients) and let that cook until it was nice and fragrant, then added some coconut milk, fish sauce, shredded lime leaves (I have a little tree in the garden) and some extra chilli (because I like my curries hot) and then put in the whole trout and then the pumpkin, then zucchini and finally towards the end, the sno peas.  A final flavour adjustment – dash more fish sauce, squeeze of lime juice and meal done!

Jasmine rice on the stove – also something that you just set and forget.  The  cucumber relish is super easy too.  It’s equal parts sugar, coconut vinegar and water (4 tablespoons) and some chopped coriander root , brought to the boil and stirred until the sugar dissolves then set aside to cool.  If you have in your pantry a jar of pickled garlic, this goes in nicely, but if not, it doesn’t really matter. Finely slice red shallots, chilli and cucumber into a bowl then pour over the vinegar mixture.  Delicious and super quick and easy.  All you then have to do is wait for the evening to get on  – never a good idea to start cooking too early. 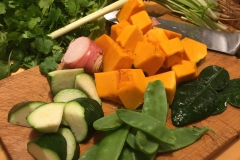 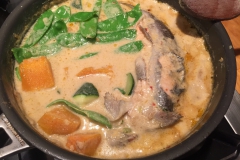 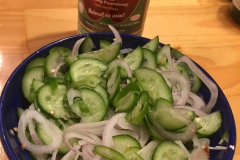