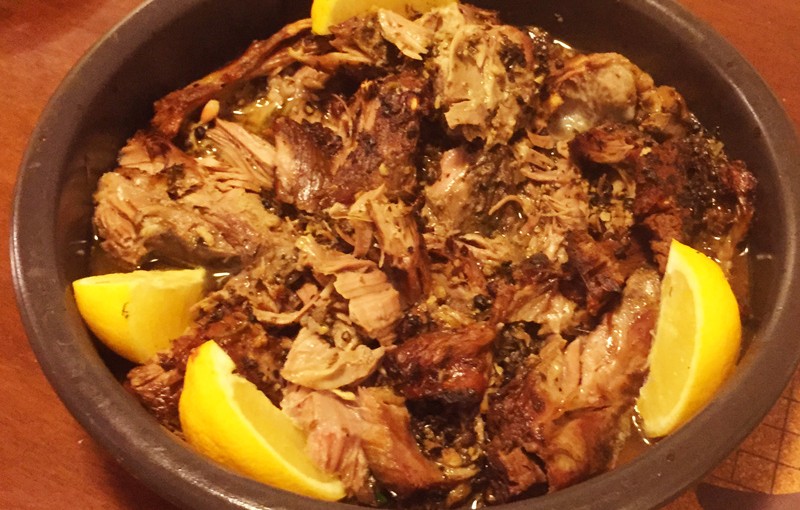 It’s Sunday and I’m cooking lamb.  I’ve been out of action for a number of days – struck down by a particularly nasty bout of  gastro and ‘flu which left me feeling like even lifting a cup of tea was too much effort. As for food, the best I could do was nibble on the occasional dry biscuit and have sips of weak black tea with honey (ah, poor me). Finally though I have crawled out of my nest of doona, pillows and blankets and managed to regain my appetite.  And then some. Yesterday I took things easy and shredded some poached chicken into some rice cooked in chicken stock with ginger and accompanied with fresh plain yoghurt.

Despite its seeming blandness it was actually really tasty and moreish and so my thoughts have turned to another great meat and yoghurt combination.  Feeling like something more substantial (but really I suspect it’s just that I think it will be the perfect accompaniment to my yoghurt & herb salad)  I have decided on  a slow cooked shoulder of lamb.

Generally I find lamb too rich and fatty, but cooked this way – and allowing the lamb to get cold so that you can remove all the fat –  makes it less so. This is a recipe I got from Karen Martini and I think its probably the best (and easiest) roast lamb ever.  I do like Ottollenghi’s Lamb Shawarma but it’s a longer process and I’m a fan of the quick cook. Plus I know I always have the necessary ingredients on hand. I probably only make this a couple of times a year, and usually only when there are enough people around for it to be eaten (devoured) in one go. It’s always a success.  So much so that any leftover lamb seems to be always taken away by guests.  Now that’s a compliment.

I prefer to start this dish a day ahead so that you can put it in the fridge and then next day its easy to get rid of all the solidified fat.  Then all you need to do is heat it up before serving.  But it’s equally do-able on the day – its just such a tedious process to get rid of the liquid fat while leaving behind the juices.  Surely someone has invented a device for this purpose?

Heat oven to around 160 degrees.
Smash garlic cloves with the  back of a knife and place in a mortar along with the peppercorns, salt and rosemary.  Pound until paste-like then add olive oil and dried oregano.
Spread the lamb out into a ceramic baking dish – I like to butterfly it and I also remove the excess fat from the top – and rub the mixture into the flesh.  Massage it well then drizzle the vinegar over.  Pour the water into the bottom of the dish.  Cover with foil and put into the oven for at least 2 1/2 hours.  I have a very crappy oven so it takes about 4-5 hours for my lamb to cook.  You’ll know it’s ready when it starts to fall apart.
Take it out of the oven, and if you’re serving it soon, skim the fat off and return to the top shelf in the oven.  Boost the temperature up to high – around 220 degrees – and cook the lamb for about 5 minutes, letting it become nice and brown and crispy.
To serve, squeeze over some lemon juice.  It’s really that simple.  I generally serve it out of the dish it’s been cooked in. 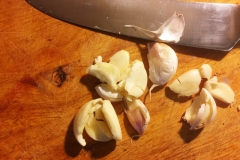 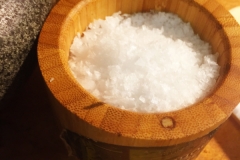 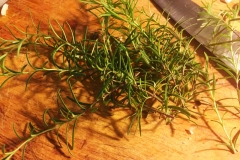 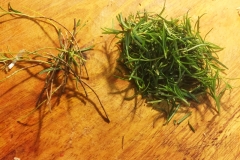 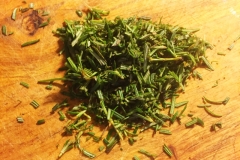 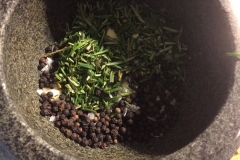 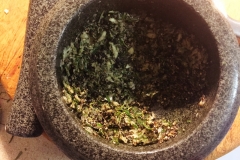 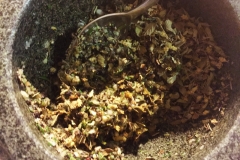 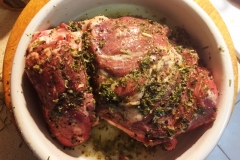 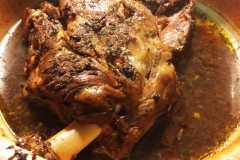 cook slowly till meat falls away from the bone 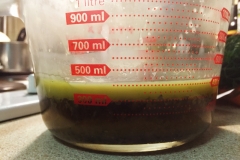 separate fat from liquid
And to accompany:

My yoghurt salad/dip:
Place yoghurt into a salad bowl then add a couple of handfuls of fresh rocket, a handful of chopped dill, spring onion and thinly sliced cucumber that has been sprinkled in salt and allowed to drain in a sieve. Add salt and pepper and that’s it.  Simple but perfect. 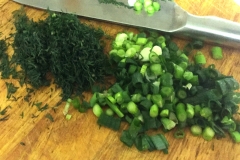 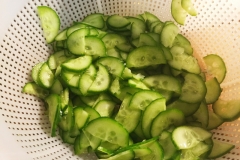 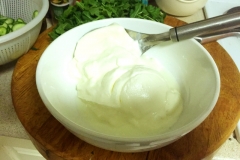 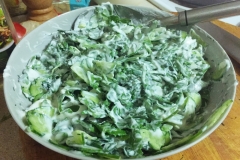