Warning: count(): Parameter must be an array or an object that implements Countable in /nfs/c01/h08/mnt/34783/domains/tania.layden.info/html/wp-includes/theme.php on line 630
 Tim Maguire – Not a Fashionista
Skip to content 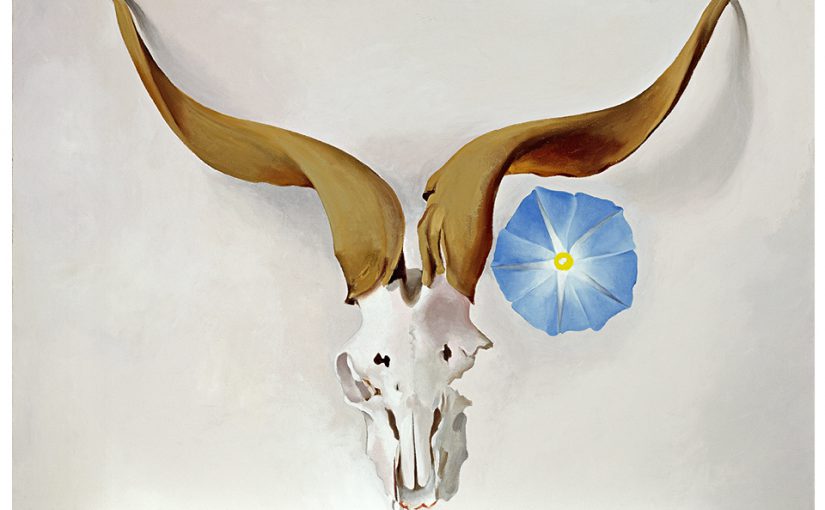 In a post-post-modernist world, how many people are familiar with the amazing accomplishments of the modernists?  They were the pioneers of colour, form, daring simple styles and subject matter previously deemed unworthy of artistic endeavour.

I was a bit sceptical about going to see Modernism at Queensland Art Gallery, an exhibition showcasing the work of Georgia O’Keeffe, Grace Cossington-Smith and Margaret Preston.  Putting those three women’s work together seemed a bit like an afterthought – we’ve managed to secure paintings by Georgia O’Keeffe but not enough for a stand-alone show, or curating a show out of whatever’s not recently been seen from the stockroom.  Certainly it seemed odd to show O’Keeffe with the other two Australians – Margaret Preston and Grace Cossington-Smith.

But each artist has transformed traditional still-life into a more vibrant and modern aesthetic.  Georgia O’Keeffe’s paintings fill the canvas with close-ups of magnificent blooms, their bright colours and abstract quality conveying a distinct sensuality. Margaret Preston’s graphic paintings focus on design and pattern and remind me of the early Russian modernists with their focus on constructivism and utilitarian design as well as the still-life paintings of Giorgio Morandi. One of my favourites is a very minimalist painting of a tray of cups Implement Blue (1927), highly stylised and beautiful in its minimalist, industrial design. I love the play of light and use of geometric pattern and colour.  I’m not a fan of Preston’s later work where she appropriates colour and design from a quasi-Aboriginal aesthetic – all these strike me as being works of design rather than landscape painting.

In a way, Grace Cossington-Smith is the odd one out; her paintings seem more post-impressionist rather than modernist – apart from The sock knitter (1915) – and her subject matter less interesting. The sock knitter is a portrait of her sister knitting socks for soldiers fighting in France.  The interesting thing about this painting is it’s emphasis on compositional structure: the play of horizontals and verticals through the misalignment of the cushions on the back of the sofa which sit at odds with the intimate and commonplace subject matter.  It’s one of Cossington-Smith’s best (if not the best) paintings). A tension between subject matter and surface, which reminds me of Matisse.

Christopher Allen in his review of the exhibition (when it showed originally at Heide) wrote: The exhibition includes a number of abstract or semi-abstract works from O’Keeffe’s earlier period, including the years when she shared a home with Stieglitz at Lake George. These are finely painted with a sensuous pleasure in surface texture and a love of seductive, even sexual forms, even if the notoriously vulval flowers are barely present here. And it is this erotic vitality that separates her so starkly from the rather spinsterly sensibility of the two Australians.”  And it is indeed this aspect that made me sceptical of seeing this show.

I first came across Georgia O’Keeffe when I was a young art student in the 70’s. Back then she was very much a feminist icon – her bright paintings of canna lillies and other exotic flowers were often described as images of vulvas, though O’Keeffe always denied this.  In some way O’Keeffe’s work became conflated with that of Judy Chicago’s (one of the “first-generation feminist artists,” who was part of the Feminist art movement in Europe and the United States in the early 1970s to develop feminist writing and art and at the time and who were heroes to many young women seeking to advance their own artistic practices).

Chicago’s famous installation The Dinner Party was a collaborative piece that made no hierarchical distinction between art and craft, indeed it was the very inclusion on some of these crafts (hand women settings, pottery, embroidery etc) that made the installation so significant. I was lucky enough to see it in the 80’s at the Melbourne Exhibition Building, which was still functioning back then.  The Dinner Party is considered as one of the first epic feminist artworks, serving as a symbolic history of women in Western civilisation. It consisted of three large tables put together to form a triangle, covered in white tablecloths on which were 39 elaborate place settings, each representing a significant mythical or historical woman of whom O’Keeffe was one.  Each of the plates was beautifully hand painted depicting a flower or butterfly image evoking a vulva.

The works on display at QAG are actually well curated and worth the visit.  Depending on your individual taste you’ll find one artist’s work more interesting than others.  For all my misgivings about a show on modernism that consisted of these three seemingly disparate female artists, I think it’s interesting to re-visit this long-forgotten aspect of early twentieth century art making and remind ourselves of the trajectory.  Certainly some of O’Keefffe’s beautiful pastel works seem like a precursor to colour-field painting, especially the paintings of Helen Frakenthaller and I loved some of her dark almost abstract landscapes. I also found resonance with Tim Maguire’s beautiful close-up paintings of flowers, especially tulips. Whatever the connections, whatever the inspirations, it’s always good to see some art and be reminded of how it’s an ever changing landscape (pardon the pun).