Warning: count(): Parameter must be an array or an object that implements Countable in /nfs/c01/h08/mnt/34783/domains/tania.layden.info/html/wp-includes/theme.php on line 630
 knitting – Not a Fashionista
Skip to content

My brain’s tired.  More specifically, my right brain is tired. I’ve been overusing it. Too much computer work, thinking work, analysing and problem-solving. So today I’m going to give it a rest and be free of thinking.  I’m going sit in the sun and read my book, go for a walk along the beach and then I’m going to crochet an elephant. Ha? Really. I am in fact, crocheting a baby elephant.  Well, a soft, cuddly toy version of a baby elephant. 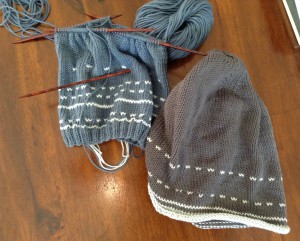 cise in logistics).  I managed to find the perfect pattern on-line but the wool that was recommended was impossibly expensive to send (it was from Germany and the shipping costs were $55).  A trip to Brisbane resolved the problem, though there too it was a bit hit and miss.  Long story short I knitted my beanie and proudly wore it on a visit to frigidly cold Melbourne.  Both my daughter and my gf loved the beanie; I left it with my gf and resolved to knit my  daughter another one.   Which I did.  By then I had become quite enamoured of knitting – especially beanies because they require knitting on 5 kneedles, which is both challenging (keeping the stitches from dropping off not just one end of the needle but two – or in this case 8!!) and fun.  It was a good thing to do in front of the telly – less drinking too (you can’t very well knit and drink).

However four beanies later, I’d had enough.  But I still wanted to knit something.  I came across some very cute toys and things on Pinterest and then I found a photo of a crocheted elephant.  I was sold.  I used to crochet way back when (remember back in the early 70’s crocheted ponchos?) so I knew that it was something I could do.

Once more I went in search of yarn. I couldn’t find the specified yarn but figured something approximating it would do – the most important thing being the colour. It didn’t take long for my brain and fingers to remember how to crochet and all was going well until I suddenly realised that this cute little cuddly toy was going to end up being rather big.  I had envisaged something that was maybe 15-20cm but the head of this elephant is looking more like an elephant cow than a baby one and I suspect the entire thing is going to be the size of a toy poodle – the real ones, not the stuffed toy variety.

What to do?  I wondered if it was the yarn I was using – I had purchased 8ply but perhaps it needed to be 4ply.  As I’ve said, I can’t leave problems alone – I have to fix them, so once more I went in search of yarn.  I did manage to find some 4ply but it wasn’t in the right colour (too pale) but never mind, I figured I could dye it a darker grey later.  Turns out that it doesn’t really make much difference and that the pattern is indeed for a somewhat larger toy elephant.  I’m going to persevere because once I’ve started something I’m determined to finish it.  Perhaps I can stuff it with something a bit sturdier than fluffy toy stuffing and use it as a door stop.  Not sure quite what that stuffing would be – maybe poured concrete? Or perhaps I could just donate it to a creche.

I have to admit that I really had no idea of what I was going to do with this little elephant – I don’t know anyone with babies.  It was just a cute project to keep me occupied.  And keep me occupied it has.

Now I think I’ll move on to my linguine doll. 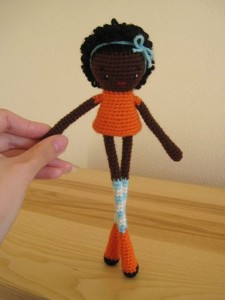