Warning: count(): Parameter must be an array or an object that implements Countable in /nfs/c01/h08/mnt/34783/domains/tania.layden.info/html/wp-includes/theme.php on line 630
 spiders – Not a Fashionista
Skip to content 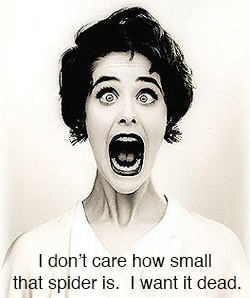 I had intentions of setting my house to rights this morning.  Unpacking the remains of the boxes and tidying the spare rooms.  All was going well; I began on the first of the spare rooms, where I was using the built in robe as a linen press.  Sorting through the sheets and pillow cases and organising onto shelves when I came across a spider.  It looked nasty, though truth be told, all spiders look nasty to me – even the pretty ones.  This one had no redeeming features except for the fact it was dark brown and unfamiliar.  We live in a sub-tropical environment where spiders of all types are common.  They’re on trees and plants and lurk in hidden places.  Some of them bite.

My strategy to deal with this arechnid was to vacuum it up.  I fetched the vacuum cleaner and plugged it in and pointed it at the spider.  My plan seemed straight forward enough:  turn on the vacuum, suck the spider in, turn off the vacuum and continue sorting in a spider-free environment.  Thwarted.  The spider scurried.  I pursued it with suction at full blast.  Alas, the spider escaped while the vacuum consumed the tissue paper I had lined the shelves with.  Now I’m left with a pile of tumbled linen, torn tissue paper, vacuum cleaner clogged and a spider running rampant, hiding who knows where.  My solution is to shut the door on the spare room and pretend the mess doesn’t exist.  Somehow I have lost enthusiasm for tidying and sorting. Sigh.