Prompted by some memorable moments from films and TV series, I found myself thinking about our childhood cinematic experiences and how easily amused we were.

It began with some classic lines from one of my favourite films, Ferris Beuller’s Day Off  – a 1986 film which I initially thought was going to be one of those god-awful Russian communist propaganda films – how wrong I was!!! “Anyone? Bueller. Anyone? Bueller.”  –  never ceases to bring a smile to my face.

Then my brother quipped: “Danger, Will Robinson, danger!”  which lead me to thinking about this space age family Robinson, with their groovy clothes, flying about in their “state of the art” space ship.  Lost In Space  was created in 1965 and set in the future age of space travel – 1997! There was the  glamorous Judy with her long, coiffed blonde hair and the dark and surly boyfriend Major Don West; the sensible mother Maureen and the handsome father, Professor John Robinson with his tight polo tops and pants. They were the height of cool. Penny (Angela Cartwright), the younger sister was the sensible counterpart to her brother Will’s (Billy Mummy) adventurous escapades.  And of course, Dr Zachary Smith the simpering, cowardly, saboteur (“Oh, the pain, the pain.”)

But the real star was the robot, whose arms (made out of concertinaed pipes would wave about and his glass domed head spin as he would warn Will Robinson of danger. And of course: “Aliens approaching”. 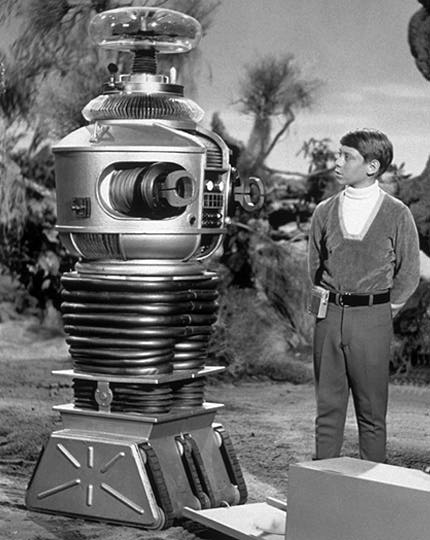 Lost in Space consisted of adventures/escapades in alien worlds created with some very basic set design.  It was all too obvious, but we didn’t care, we were still captivated, glued to the screen waiting to see what would happen. How easily pleased we were.  Essentially the premise was that while Major Don West and Professor John Robinson were busy trying to fix the space ship and Judy and her mother involved in household tasks (!) Will and the robot would go on adventures. Sometimes Penny would join them but more often she was left playing with her little pet.  Often the adventures involved Dr Smith attempting to orchestrate his departure by whatever dastardly means he could and then Will and the robot having to deal with the resultant dangerous situations.   We knew the plot, we knew the outcomes but still we watched.  Mesmerised.  Gullible.  I don’t think much has changed – only the sets have become more sophisticated.